Zarif Had No Knowledge of Israeli Strikes Until Kerry Told Him, Translation Reveals 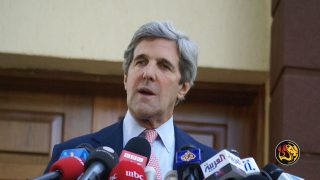 (Worthy News) – Leaked audiotape of Iranian foreign minister Javad Zarif indicates he had no knowledge of covert Israeli military strikes before former secretary of state John Kerry provided him with the information, new details that contradict the State Department’s recent defense of Kerry.

These details are likely to further fuel calls from leading Republicans for Kerry’s firing or resignation. The New York Times reported that Zarif said on the tape that Kerry told him Israel launched 200 airstrikes against Iranian interests in Syria. The Times did not provide further details on that issue. But an independent translation of the audiotape commissioned by the Washington Free Beacon shows that Zarif went on to clarify that he had no prior knowledge of these Israeli strikes before Kerry told him.

“Kerry told me that Israel had launched 200 airstrikes against you [Iran],” said Zarif. “You didn’t know?” asked his interviewer. “No, no,” he replied. [ Source: Washington Free Beacon (Read More…) ]

Tags: Iran, Israel, John Kerry, Military, New York Times, News, Republican, Syria, Washington, Worthy News
Fair Use Notice:This site contains copyrighted material the use of which has not always been specifically authorized by the copyright owner. We are making such material available in our efforts to advance understanding of environmental, political, human rights, economic, democracy, scientific, and social justice issues, etc. We believe this constitutes a 'fair use' of any such copyrighted material as provided for in section 107 of the US Copyright Law. In accordance with Title 17 U.S.C. Section 107, the material on this site is distributed without profit to those who have expressed a prior interest in receiving the included information for research and educational purposes. For more information go to: http://www.law.cornell.edu/uscode/17/107.shtml. If you wish to use copyrighted material from this site for purposes of your own that go beyond 'fair use', you must obtain permission from the copyright owner.