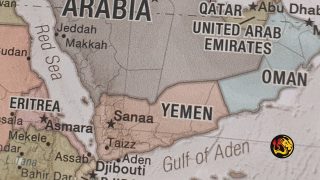 (Worthy News) – A Saudi-led coalition on Saturday launched a “large-scale” assault on Yemen after a projectile killed two people in the kingdom, in the first such deaths in three years caused by the Iran-backed Houthi rebels.

On Friday, the Saudi-led coalition carried out an attack immediately after the assault on what it called “the attack’s origins.”

The Houthis warned Yemen’s oil-rich northern neighbor of a “painful” response if the coalition does not stop its “aggression.” [ Source: Algemeiner (Read More…) ]

The Saudi-led coalition on Sunday accused Iran and Hezbollah of helping Yemen’s Houthi rebels to launch missiles and drones at the kingdom, where two people were killed.

Since the coalition intervened almost seven years ago to support Yemen’s government, Saudi Arabia has regularly accused Iran of supplying the Houthis with sophisticated weapons and Hezbollah of training the insurgents.

We're being CENSORED ... HELP get the WORD OUT! SHARE!!!
Tags: Iran, Media, News, oil, War, Worthy News, Yemen
Fair Use Notice:This site contains copyrighted material the use of which has not always been specifically authorized by the copyright owner. We are making such material available in our efforts to advance understanding of environmental, political, human rights, economic, democracy, scientific, and social justice issues, etc. We believe this constitutes a 'fair use' of any such copyrighted material as provided for in section 107 of the US Copyright Law. In accordance with Title 17 U.S.C. Section 107, the material on this site is distributed without profit to those who have expressed a prior interest in receiving the included information for research and educational purposes. For more information go to: http://www.law.cornell.edu/uscode/17/107.shtml. If you wish to use copyrighted material from this site for purposes of your own that go beyond 'fair use', you must obtain permission from the copyright owner.