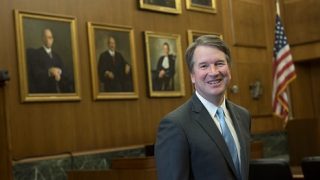 The area was the site of protests by abortion-rights activists when the judge’s supporters had already expressed concern about the security situation.

Abortion-rights supporters have rallied outside Kavanaugh’s home and those of at least two other justices since the May 2 publication of a leaked draft ruling on a pivotal abortion case.

The draft showed that the Supreme Court’s conservative majority was poised to overturn its landmark 1973 Roe v. Wade decision that legalized abortion nationwide.

Media reports said the detained man, in his mid-20s, was angry about the draft opinion.

Amid mounting pressure on the Biden administration to provide security, justices have been provided round-the-clock security at their homes. There have been concerns about violence when the court announces its ultimate decision.

Protests near Kavanaugh’s house in a Maryland suburb just outside the District of Columbia were described by critics as “threatening” to his family.

Similar worries were uttered about rallies near the homes of other justices, as well as demonstrations at the court. A security fence now rings the Supreme Court building, and nearby streets have been closed.