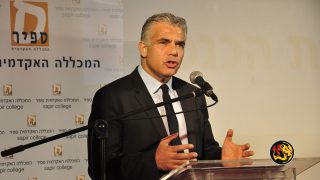 The 58-year-old leader took over Friday from Prime Minister Naftali Bennett, who resigned following the collapse of the coalition government.

Lapid, who heads a centrist party, will lead the country towards elections on November 1. He faces a tough rival as former Prime Minister Benjamin Netanyahu, a political veteran, has vowed to return to power.

On his first day in office, Lapid was to hold a meeting with Ronen Bar, the head of the Shin Bet security agency, at the Kirya military headquarters in Tel Aviv. The talks come at a time of growing domestic and regional security challenges for the Jewish state.

“We’ll do the best we can for a Jewish, democratic state, good and strong and thriving, because that is the job, and it’s bigger than all of us,” Lapid said.

The new prime minister’s abilities will be tested Friday as he is scheduled to hold a meeting to discuss “the captives and MIAs,” a reference to the two Israeli men and the remains of two Israeli Defense Forces (IDF) soldiers being held by the Hamas group in the Gaza Strip

Hamas disseminated a video this week showing Israeli captive Hisham al-Sayed hooked up to an oxygen mask, the first image of him since he crossed into Gaza in 2015.

Hamas is believed also to be holding Avera Mengistu, as well as the remains of soldiers Oron Shaul and Hadar Goldin. Talks to secure their release have stalled repeatedly over the years.

In addition, Israel is concerned that Iran could soon will have nuclear weapons, which it has pledged to prevent.

And reports that Hamas and Syria have re-established relations after a decade of rupture between them represent a source of concern for Israel, officials say.

US President Joe Biden congratulated Lapid for becoming the new prime minister and thanking the previous leader “for your friendship over the past year. ”

“I look forward to seeing you both in July to celebrate the unbreakable U.S.-Israel partnership,” Biden added.

Earlier this week, government officials from Israel, the United States, and Arab allies discussed “expanding the circle of lasting peace” in the Middle East, officials confirmed.