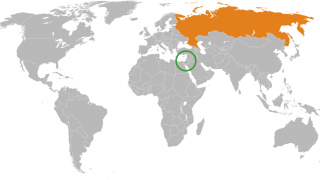 (Worthy News) – Moscow on Monday condemned an alleged Israeli airstrike near a Russian stronghold in Syria over the weekend, calling Israel’s years-long air campaign in Syria “categorically unacceptable” and demanding it cease.

“We strongly condemn such irresponsible actions that violate the sovereignty of Syria and the basic norms of international law, and we demand their unconditional cessation,” Foreign Ministry spokesperson Maria Zakharova said in a statement.

The relatively rare daytime strike on Saturday targeted an area near the Syrian town of al-Hamidiyah, south of Tartus, which is home to Russia’s main naval base in the region. Two civilians were injured and serious damage was caused to civilian infrastructure, Moscow said. [ Source: Times of Israel (Read More…) ]

We're being CENSORED ... HELP get the WORD OUT! SHARE!!!
Tags: infrastructure, IRS, Israel, News, Russia, Syria, Worthy News
Fair Use Notice:This site contains copyrighted material the use of which has not always been specifically authorized by the copyright owner. We are making such material available in our efforts to advance understanding of environmental, political, human rights, economic, democracy, scientific, and social justice issues, etc. We believe this constitutes a 'fair use' of any such copyrighted material as provided for in section 107 of the US Copyright Law. In accordance with Title 17 U.S.C. Section 107, the material on this site is distributed without profit to those who have expressed a prior interest in receiving the included information for research and educational purposes. For more information go to: http://www.law.cornell.edu/uscode/17/107.shtml. If you wish to use copyrighted material from this site for purposes of your own that go beyond 'fair use', you must obtain permission from the copyright owner.