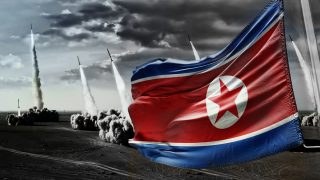 Tuesday’s missile test, which was launched from the Jangang province, near the border with China, supposedly reached a speed of Mach 10, or 10 times the speed of sound. The weapon flew approximately 700 kilometers before landing in waters off the country’s eastern coast.

North Korea claimed that the missile test last week was hypersonic, though South Korean and U.S. officials were skeptical. Pentagon spokesman John Kirby reiterated to reporters on Monday that U.S. officials “called it a ballistic missile. And we are still assessing the details of it.” [ Source: Washington Examiner (Read More…) ]

We're being CENSORED ... HELP get the WORD OUT! SHARE!!!
Tags: China, News, North Korea, Pentagon, South Korea, Washington, Worthy News
Fair Use Notice:This site contains copyrighted material the use of which has not always been specifically authorized by the copyright owner. We are making such material available in our efforts to advance understanding of environmental, political, human rights, economic, democracy, scientific, and social justice issues, etc. We believe this constitutes a 'fair use' of any such copyrighted material as provided for in section 107 of the US Copyright Law. In accordance with Title 17 U.S.C. Section 107, the material on this site is distributed without profit to those who have expressed a prior interest in receiving the included information for research and educational purposes. For more information go to: http://www.law.cornell.edu/uscode/17/107.shtml. If you wish to use copyrighted material from this site for purposes of your own that go beyond 'fair use', you must obtain permission from the copyright owner.