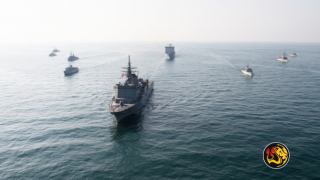 (Worthy News) – The United States will send a warship and fighter jets to help defend the United Arab Emirates, officials said on Wednesday, after a series of missile attacks by Yemeni rebels left three dead in the wealthy Gulf state. The deployment, to “assist the UAE against the current threat,” follows a phone call between Defense Secretary Lloyd Austin and Abu Dhabi Crown Prince Mohammed bin Zayed Al-Nahyan, the U.S. Embassy in the UAE said.

The UAE, a major financial hub that is part of the Saudi-led coalition fighting Yemen’s Iran-backed Houthi rebels, suffered its third missile attack in as many consecutive weeks on Monday.

As part of the new arrangements, the USS Cole guided missile destroyer will partner with the UAE Navy and make a port call in Abu Dhabi, while the U.S. will also deploy fifth-generation warplanes. Other actions include “continuing to provide early warning intelligence (and) collaborating on air defense,” the embassy said. [ Source: CBS News (Read More…) ]

Tags: Iran, News, PLO, United States, War, Worthy News, Yemen
Fair Use Notice:This site contains copyrighted material the use of which has not always been specifically authorized by the copyright owner. We are making such material available in our efforts to advance understanding of environmental, political, human rights, economic, democracy, scientific, and social justice issues, etc. We believe this constitutes a 'fair use' of any such copyrighted material as provided for in section 107 of the US Copyright Law. In accordance with Title 17 U.S.C. Section 107, the material on this site is distributed without profit to those who have expressed a prior interest in receiving the included information for research and educational purposes. For more information go to: http://www.law.cornell.edu/uscode/17/107.shtml. If you wish to use copyrighted material from this site for purposes of your own that go beyond 'fair use', you must obtain permission from the copyright owner.