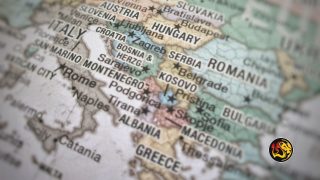 PRISTINA/BELGRADE (Worthy News) – Kosovo’s government has postponed new border rules after clashes in the north of the country where ethnic Serbs blocked roads and gunmen fired on police. The unrest in the Balkans have added to concerns within the NATO military alliance and the European Union about a possible new conflict in Europe, which is already facing war in Ukraine.

Under the new rules, people entering Kosovo with Serbian identity documents would have to replace them with a temporary document during their stay in the country.

Despite Serbia having the same requirements as Kosovo, the attempts to impose Pristina’s authority in Northern Kosovo did not go well.

The NATO-led peacekeepers in Kosovo, known as KFOR, labeled the security situation in the north “as tense,” with witnesses saying shots were fired at police on Sunday.

Large crowds of local Serbs also gathered around the barricades intending to remain there. Police said they closed two border crossings with Serbia after the incident, during which no one was injured.

The clashes underscored long-simmering tensions in the region. Kosovo, a small country of some two million people, proclaimed independence from Serbia in 2008. But ethnic Serbs, who comprise the majority in the northern part, do not recognize Pristina’s authority.

However, there is concern within NATO and the European Union that their standoff could lead to a broader conflict between Albanian Muslim-majority Kosovo and neighboring Serbia, a mainly Orthodox Christian nation.

That’s why Kosovo’s leadership said that after talking with U.S. and EU officials, it decided to postpone the documents requirement, which was due Monday, until September 1.

Pristina also said it would give Serbs a transitional period of 60 days to get Kosovo license plates, a year after giving up trying to impose them due to similar protests.

Belgrade views Kosovo as its province and refuses to recognize its independence.

Serbia’s nationalist President Aleksandar Vucic said in remarks that the “atmosphere has been brought to a boil” and warned that in his words, “Serbia will win” if Serbs are attacked in mainly Albanian Kosovo.

He said: “There is less and less readiness to hear our pleas. And my request today to everyone is to try to preserve the peace at almost any cost. So I am making one more attempt to ask everyone, once again, the Albanians, to come up to their senses. To ask the Serbs not to fall for provocations and not to do anything that could lead to conflict.”

But Kosovo’s Prime Minister Albin Kurti accused President Vucic of igniting “unrest.” Those words reflected his remarks in an earlier interview. “We are progressing in the rule of law, fighting corruption and social and economic development despite the problems with Serbia. And that is why the president of Serbia is in panic,” he said.

Both countries have held talks on membership of the European Union, but with tensions rising, there seems no appetite in Brussels to let them join the rich club soon.

Tags: Kosovo, WorthyNews
Fair Use Notice:This site contains copyrighted material the use of which has not always been specifically authorized by the copyright owner. We are making such material available in our efforts to advance understanding of environmental, political, human rights, economic, democracy, scientific, and social justice issues, etc. We believe this constitutes a 'fair use' of any such copyrighted material as provided for in section 107 of the US Copyright Law. In accordance with Title 17 U.S.C. Section 107, the material on this site is distributed without profit to those who have expressed a prior interest in receiving the included information for research and educational purposes. For more information go to: http://www.law.cornell.edu/uscode/17/107.shtml. If you wish to use copyrighted material from this site for purposes of your own that go beyond 'fair use', you must obtain permission from the copyright owner.