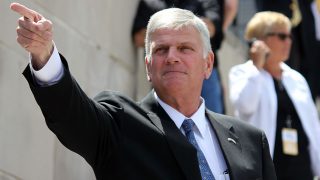 (Worthy News) – A British court has ruled that the 2018 UK Lancashire Festival of Hope featuring Franklin Graham was subject to discrimination by local authorities which removed festival bus advertisements reading only “Time for Hope,” Assist News reports. The Blackpool Borough Council and Blackpool Transport Services were found to have violated the UK’s Equality Act 2010 by discriminating against the Festival specifically because of Graham’s religious views on homosexuality.

The Blackpool authorities had removed the ads after a Twitter campaign by LGBT activists who claimed Graham’s views are offensive. However, in its ruling, the Court refused to accept the argument that public authorities can interfere with a person’s religious beliefs because another person might find them offensive when expressed in public.

According to the Billy Graham Evangelistic Association (BGEA) UK, the court emphasized that people who hold religious views about marriage and sexuality are entitled to equal treatment under the law. The court also ruled that Blackpool had violated the Lancashire Festival of Hope’s right to freedom of expression, Assist News said.

“This ruling confirms that all Christians in the UK have the right to share their beliefs in the public square without being discriminated against or interfered with by public officials and other groups that want to silence them,” James Barrett, Chairman of the Board of Directors for BGEA UK said in a statement. “I am grateful the courts have once again reiterated that the freedom to speak only what is not offensive is not freedom of speech at all.”

The Lancashire Festival of Hope was attended by some 9,000 people in Blackpool from September 21-23, 2018, Assist News said.